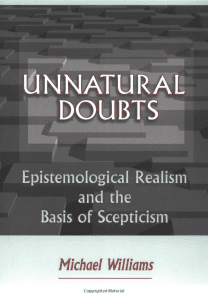 In Unnatural Doubts, Michael Williams constructs a masterly polemic against the very idea of epistemology, as traditionally conceived. Although philosophers have often found problems in efforts to study the nature and limits of human knowledge, Williams provides the first book that systematically argues against there being such a thing as knowledge of the external world. He maintains that knowledge of the world constitutes a theoretically coherent kind of knowledge, whose possibility needs to be defended, only given a deeply problematic doctrine he calls “epistemological realism.” The only alternative to epistemological realism is a thoroughgoing contextualism.