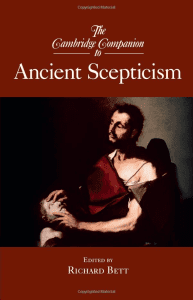 This volume offers a comprehensive survey of the main periods, schools, and individual proponents of scepticism in the ancient Greek and Roman world. The contributors examine the major developments chronologically and historically, ranging from the early antecedents of scepticism to the Pyrrhonist tradition. They address the central philosophical and interpretive problems surrounding the sceptics’ ideas on subjects including belief, action, and ethics. Finally, they explore the effects which these forms of scepticism had beyond the ancient period, and the ways in which ancient scepticism differs from scepticism as it has been understood since Descartes. The volume will serve as an accessible and wide-ranging introduction to the subject for non-specialists, while also offering considerable depth and detail for more advanced readers.