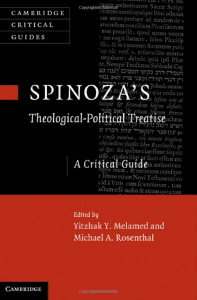 Spinoza’s Theological-Political Treatise was published anonymously in 1670 and immediately provoked huge debate. Its main goal was to claim that the freedom of philosophizing can be allowed in a free republic and that it cannot be abolished without also destroying the peace and piety of that republic. Spinoza criticizes the traditional claims of revelation and offers a social contract theory in which he praises democracy as the most natural form of government. This new Critical Guide presents new essays by well-known scholars in the field and covers a broad range of topics, including the political theory and the metaphysics of the work, religious toleration, the reception of the text by other early modern philosophers, and the relation of the text to Jewish thought. It offers valuable new perspectives on this important and influential work.