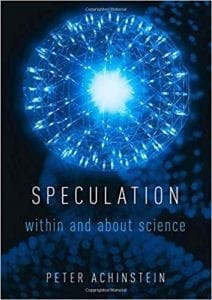 To answer these questions it must first be determined what counts as a speculation, a task not usually investigated by those who express strong views about speculation. In Speculation, Peter Achinstein develops the basic idea that speculating involves introducing assumptions, under certain “theorizing” conditions, without knowing that there is evidence for those assumptions. This idea is made precise by utilizing a concept of “evidence” Achinstein has introduced in previous writings and also explains here. With this concept, Achinstein defends a view according to which, by contrast with Newton, speculations are crucial in science, and by contrast with Einstein, they are subject to constraints. The latter include pragmatic ones, reflecting the particular aims of the scientist in speculating, and epistemic ones that are subject to a different standard then “evidence sufficient for belief.” This viewpoint is illustrated and evaluated by critically examining historical and contemporary speculations in fundamental physics as well as more general speculations within or about science, including these: nature is simple, and simplicity is a sign of truth (Newton, Einstein); a theory can only be tested “holistically” (Duhem and Quine); and there is, and must be, a “Theory of Everything” (string theorists and reductionists).