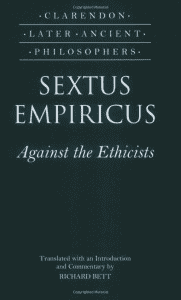 This volume contains a new translation of Against the Ethicists, together with an introduction and extensive commentary. Those who have discussed this work in the past have tended to underestimate it, regarding its main position as essentially the same as that of Sextus’s better-known Outlines of Pyrrhonism. Richard Bett shows that this text proposes a distinct and previously unnoticed philosophical outlook, associated with a phase of Pyrrhonian Scepticism earlier than Sextus himself.