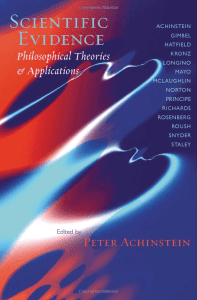 Physicists think they have discovered the top quark. Biologists believe in evolution. But what precisely constitutes evidence for such claims, and why? Scientists often disagree with one another over whether or to what extent some evidence counts in favor of a theory because they are operating with different concepts of scientific evidence. These concepts need to be critically explored. Peter Achinstein has gathered some prominent philosophers and historians of science for critical and lively discussions of both general questions about the meaning of evidence and specific ones about evidence for particular scientific theories.