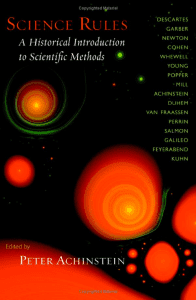 Is there a universal set of rules for discovering and testing scientific hypotheses? Since the birth of modern science, philosophers, scientists, and other thinkers have wrestled with this fundamental question of scientific practice. Efforts to devise rigorous methods for obtaining scientific knowledge include the twenty-one rules Descartes proposed in his Rules for the Direction of the Mind and the four rules of reasoning that begin the third book of Newton’s Principia, and continue today in debates over the very possibility of such rules. Bringing together key primary sources spanning almost four centuries, Science Rules introduces readers to scientific methods that have played a prominent role in the history of scientific practice.

Editor Peter Achinstein includes works by scientists and philosophers of science to offer a new perspective on the nature of scientific reasoning. For each of the methods discussed, he presents the original formulation of the method; selections written by a proponent of the method together with an application to a particular scientific example; and a critical analysis of the method that draws on historical and contemporary sources.

The methods included in this volume are Cartesian rationalism with an application to Descartes’ laws of motion; Newton’s inductivism and the law of gravity; two versions of hypothetico-deductivism—those of William Whewell and Karl Popper—and the nineteenth-century wave theory of light; Paul Feyerabend’s principle of proliferation and Thomas Kuhn’s views on scientific values, both of which deny that there are universal rules of method, with an application to Galileo’s tower argument. Included also is a famous nineteenth-century debate about scientific reasoning between the hypothetico-deductivist William Whewell and the inductivist John Stuart Mill; and an account of the realism-antirealism dispute about unobservables in science, with a consideration of Perrin’s argument for the existence of molecules in the early twentieth century.