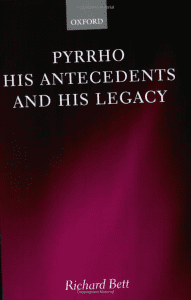 Richard Bett presents a ground-breaking study of Pyrrho of Elis, who lived in the late fourth and early third centuries BC and is the supposed originator of Greek scepticism. In the absence of surviving works by Pyrrho, scholars have tended to treat his thought as essentially the same as the long subsequent sceptical tradition which styled itself “Pyrrhonism.” Bett argues, on the contrary, that Pyrrho’s philosophy was significantly different from this later tradition, and offers the first detailed account of that philosophy in this light. Bett considers why Pyrrho was adopted as the figurehead for that tradition. Bett also investigates the origins and antecedents of Pyrrho’s ideas; in particular, Plato is singled out as an important inspiration. The result is the first comprehensive picture of this key figure in the development of philosophy. The new claims that Bett puts forward have major implications for the history and interpretation of ancient Greek thought.