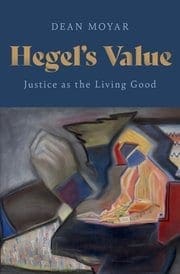 Hegel’s Philosophy of Right has long been recognized as the only systematic alternative to the dominant social contract tradition in modern political philosophy. Dean Moyar here takes on the difficult task of reading and representing Hegel’s view of justice with the same kind of intuitive appeal that has made social contract theory, with its voluntary consent and assignment of rights and privileges, such an attractive model. Moyar argues that Hegelian justice depends on a proper understanding of Hegel’s theory of value and on the model of life through which the overall conception of value, the Good, is operationalized.

Closely examining key episodes in Phenomenology of Spirit and the entire Philosophy of Right, Moyar shows how Hegel develops his account of justice through an inferentialist method whereby the content of right unfolds into increasingly thick normative structures. He asserts that the theory of value that Hegel develops in tandem with the account of right relies on a productive unity of self-consciousness and life, of pure thinking and the natural drives. Moyar argues that Hegel’s expressive account of the free will enables him to theorize rights not simply as abstract claims, but rather as realizations of value in social contexts of mutual recognition.

Moyar shows that Hegel’s account of justice is a living system of institutions centered on a close relation of the economic and political spheres and on an understanding of the law as developing through practices of public reason. Moyar defends Hegel’s metaphysics of the State as an account of the sovereignty of the Good, and he shows why Hegel thought that philosophy needs to offer an account of world history and reformed religion to buttress the modern social order.