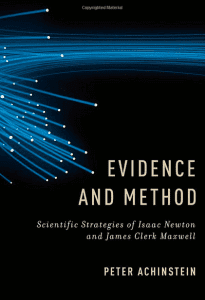 What is meant by scientific evidence, and how can a definition of this concept be applied in the sciences to determine whether observed facts constitute evidence that a given theory is true?

In this book, Peter Achinstein proposes and defends several objective concepts of evidence. He then explores the question of whether a scientific method, such as that represented in the four “Rules for the Study of Natural Philosophy” that Isaac Newton invoked in proving his law of gravity, can be employed in demonstrating how the proposed definitions of evidence are to be applied to real scientific cases. In answering this question, he offers a new interpretation of Newton’s controversial rules. Contrary to what many methodologists assume, whether the rules, so interpreted, can be used to determine whether observed phenomena provide evidence for a theory is an empirical question, not an a priori one. Finally, in order to deal with numerous cases in which evidence is insufficient to establish a theory, or where no theory is even available, Achinstein describes and defends three scientific methods proposed by the 19th century theoretical physicist James Clerk Maxwell, in the course of developing his electrical and molecular theories.