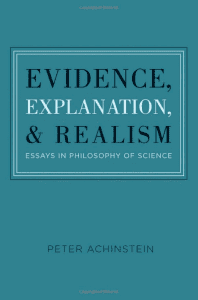 The essays in this volume address three fundamental questions in the philosophy of science: What is required for some fact to be evidence for a scientific hypothesis? What does it mean to say that a scientist or a theory explains a phenomenon? Should scientific theories that postulate “unobservable” entities such as electrons be construed realistically as aiming to correctly describe a world underlying what is directly observable, or should such theories be understood as aiming to correctly describe only the observable world?

Distinguished philosopher of science Peter Achinstein provides answers to each of these questions in essays written over a period of more than 40 years. The present volume brings together his important previously published essays, allowing the reader to confront some of the most basic and challenging issues in the philosophy of science, and to consider Achinstein’s many influential contributions to the solution of these issues.