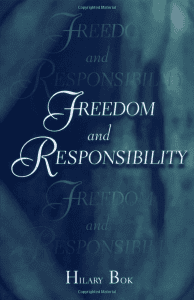 Can we reconcile the idea that we are free and responsible agents with the idea that what we do is determined according to natural laws? For centuries, philosophers have tried in different ways to show that we can. Hilary Bok takes a fresh approach here, as she seeks to show that the two ideas are compatible by drawing on the distinction between practical and theoretical reasoning.

Bok argues that when we engage in practical reasoning—the kind that involves asking “what should I do?” and sifting through alternatives to find the most justifiable course of action—we have reason to hold ourselves responsible for what we do. But when we engage in theoretical reasoning–searching for causal explanations of events—we have no reason to apply concepts like freedom and responsibility. Bok contends that libertarians’ arguments against “compatibilist” justifications of moral responsibility fail because they describe human actions only from the standpoint of theoretical reasoning. To establish this claim, she examines which conceptions of freedom of the will and moral responsibility are relevant to practical reasoning and shows that these conceptions are not vulnerable to many objections that libertarians have directed against compatibilists. Bok concludes that the truth or falsity of the claim that we are free and responsible agents in the sense those conceptions spell out is ultimately independent of deterministic accounts of the causes of human actions.

Clearly written and powerfully argued, Freedom and Responsibility is a major addition to current debate about some of philosophy’s oldest and deepest questions.